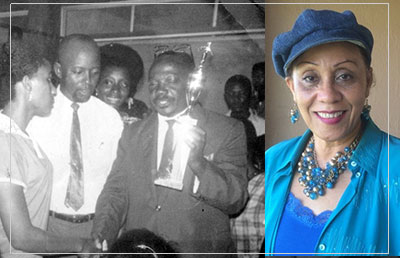 Vera “Veve” Hogstrom- Ashman is a delighted alumnae of Lott Carey Mission (LCM). Graduating with the class of 1971, she says, she is honored to be a part of the Lott Carey family. Vera was a Lioness and captained that competitive LCM girl’s kickball team four years in a row. It was the team that won four national championships and put LCM kickball high on the map (see picture above with Vera receiving one of those championship trophies). In addition to being one of the most valuable players, the “skipper” was also elected Sunday School Superintendent in her senior year. Vera also organized the first "Y-Teens" Club on Lott Carey and represented the school at the national convention in Monrovia. She played on the LCM girls’ volleyball and basketball teams and still found time to sing in the famous Lott Carey School choir.

Upon graduation from Lott Carey, “Veve” journeyed to the United States to attend Rutgers University and received her Bachelor of Arts in Business Management with a minor in English Literature. Upon completion, she was immediately employed in the banking industry in Newark, New Jersey and later, New York City; working with: First Jersey Bank, National Westminster and Fleet Banks (now Bank of America) in New York City. Vera held positions as Assistant Treasurer, and directed the cash management department. Her vast experience in banking, steered her to work with Ameritrade, where she held a management position and supervised a staff of ten. After 911, the banking industry took a severe hit with bad mortgages and bad investments, leading Vera to make a complete career change. “Education was the best career move I ever made,” says Vera. “I love to help change lives. I feel it is an accomplishment to mentor students and to see the results end in graduation. It is very fulfilling,” she concludes.

WHERE IS VERA “VEVE” HOGSTROM-ASHMAN NOW?

Vera has been working in education over the last ten years as assistant director of Admissions for Lincoln Technical Institution in New Jersey. She recently transferred to Lincoln College of Technology in West Palm Beach, Florida, where she has maintained her home over the years. During her spare time, she enjoys writing and working on her first book. Vera also helps the disadvantaged with various types of donations.