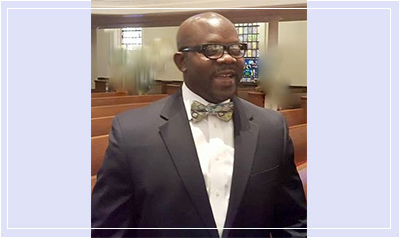 Sam enrolled at the Lott Carey Mission School in 1980 as a fifth grader and was Valedictorian of the Class of 1987. During his stay at LCM, he served as Student Council President, a member of the IQ quizzing team, the cultural troop, drama club, debate club and participated in several sporting events. Sam Barker matriculated to the University of Liberia where he earned a BA in Political Science with minor in Mass Communications.

Due to the Liberian civil war, Sam took refuge in Ghana where he underwent technical training in woodworking and subsequently worked as a furniture maker until he migrated to the United States. Upon arrival in the USA, Sam began a new career with the Healthcare Company of America (HCA), working with its Shared Services Division in Norcross, Georgia. Alongside his thirteen year service at HCA, Sam was an entrepreneur; owning and operating the Samvee Dry Cleaners, a full service dry cleaning facility providing services and employment to residents of Stone Mountain and surrounding communities in Georgia. He also founded Lone Star Logistics LLC, a shipping, marketing and logistical supply company with branches in Atlanta and Monrovia, Liberia.

WHERE IS SAM BARKER NOW?

With a year’s experience at Boeing, he left to join Landmark Aviation as a general aircraft mechanic. Six months later, Sam re-joined the Boeing family as an Aircraft Inspector on the 787 Dreamliner. This is a position he currently holds. However, Sam is also completing his studies on a Master of Science degree in Logistics and supply chain from the Embry-Riddle Aeronautical University. “All thanks to LCM for the firm foundation that has allowed me to compete and excel in diverse career capacities, making a positive contribution to the global community,” he concludes.