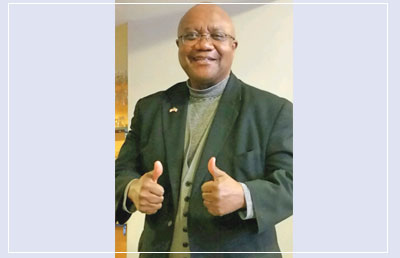 This 1972 alumnus of the Lott Carey Baptist Mission School was born and raised in Brewerville, Liberia. He was president of his senior class - "Shak-A-Hama," which means, "Shake the Universe" and a member of the well-known singing group, The Lott Carey Messengers. Ike hails from a family that enjoys singing.

After high school, Ike studied Sociology at the University of Liberia while he worked as Pastor's Secretary/Administrative Assistant at Eliza Turner African Methodist Episcopal Church -- the cathedral of African Methodism in West Africa. That's where Ike often says, he received the education about life and living no college offers during his interactions with black American Bishops and pastors as well as local clergy assigned to the church.

Ike later traveled to the United States on a partial scholarship to study Law Enforcement Administration at Wayne County Community College in Detroit, Michigan. His hope was to become an F.B.I. agent. He changed majors and pursued Mass Media Communications at Wilberforce University, an A.M.E. Church school in Wilberforce, Ohio where he earned a B.A. degree. While at Wilberforce, Ike was associate editor of the Wilberforce Mirror student newspaper, feature writer of the Student Outlook paper at WC3, Detroit, and editor of FOLAO News, a publication of the Federation of Liberian Associations in Ohio. Ike then moved to Euclid, Ohio and pursued graduate studies in communications at Cleveland State University.

Following internships at the Staten Island Advance newspaper and East Ohio Gas corporate communications, Ike began working for the Frederick News-Post in 1993, covering local government, business, schools and agriculture. He often says, "How many jobs take you to the White House twice?" Ike recently ended 21 years with the Frederick News-Post.

WHERE IS IKE R. WILSON TODAY?

Ike and his darling wife, Zoe, currently live in Frederick, Maryland, a community they enjoy.