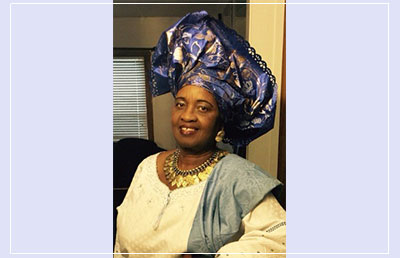 Mrs. Martha Gblai-Dennis graduated with one of the smallest graduating classes of Lott Carey Baptist Mission School, the Class of 1965, which had seven (7) graduates. For a student who traveled from Lower Nimba County, Liberia to become a boarding student on Lott Carey, she confesses that LCM was an environment where she made friends, focused on academics and was involved in satisfying and meaningful extra curriculum activities such as home economics events and singing in the famous Lott Carey Mission School choir.

A few years after graduating from her Alma Mater, Martha entered the University of Liberia to study accounting. Armed with a Bachelor’s Degree, she worked 12 years as an accountant; first, with Liberia’s Water and Sewer Company, the Liberia Postal Service and finally, with the Liberia Electric Corporation. When the first civil war erupted, Mrs. Dennis and her children fled Liberia in 1990 for Worcester, Massachusetts. In Worcester, she enrolled in Salter College’s certificated program in computerized accounting. A few years later, Martha Gblai (Mrs. Dennis) changed course to pursue certification as a practical nurse from Richmond School of Health and Technology, Richmond, Virginia. Prior to her nursing pursuits, Martha established and managed her own company, Labor Placement Services, a personnel placement agency in Worcester.

WHERE IS MARTHA GBLAI-DENNIS NOW?

Martha and her husband, former Liberian General Willie G. Dennis reside in Worcester, Massachusetts where they have lived 26 years. Together, they have three children and two grandchildren. Martha is employed with River Terrace Rehabilitation Center in Worcester as a nurse. She and her husband enjoy travelling throughout the United States and Martha has visited Liberia twice since her arrival to the United States in 1990.