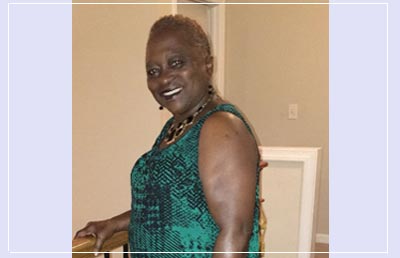 Mrs. Minnie Johnson Benson graduated salutatorian of the class of 1966, Lott Carey Baptist Mission School, Brewerville, Liberia. While in high school, Minnie was a star player on the LCM Lions kickball team. After graduation, she was accepted and attended the University of Liberia. Upon completion of her first two years of college, Minnie became a teacher at Lott Carey for the 1st and 2nd grade classes while continuing her higher education at the University of Liberia. In 1968, Minnie married her Brewerville sweetheart, Mr. Bernard “Boy Blue” Benson, Sr., who was a teacher, business manager and a graduate of the Lott Carey Class of 1956.

Minnie served as Secretary with the US Peace Corps for 7 years and later served, for more than 10 years, as Executive Secretary to the EEC Delegate in Monrovia, Liberia. Because of the Liberian civil war, she left the EEC and her beloved country, Liberia and moved to Atlanta, Georgia, USA, to be with her children.

Where is Minnie Benson now?

Minnie Benson is now retired after 24 years of service with Alltel/Windstream, a telecommunications company. She resides in Dacula, Georgia and now spends most of her time doing what she loves best, cooking and spending time with her children and grandchildren.