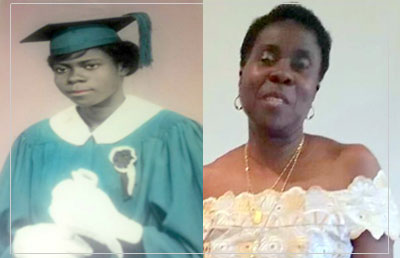 Meet Gwendolyn “Gwen” Aniteye-Amet, a 1966 graduate of the Lott Carey Baptist Mission School in Brewerville, Liberia. Gwen attended LCM as a boarding student from 1960 to 1966. Upon graduation, she matriculated to the University of Liberia (LU) where she earned a BA in English with a minor in French.

After LU, Gwen worked with The Liberian Telecommunications for a year before deciding to further her studies abroad. She enrolled in L’Universite de Lausanne, Switzerland and later transferred to Ecole Polyglotte, School of Linguistics/Interpretation/Translation – Montreux, Switzerland, where she obtained her Master of Arts equivalency.

Returning to Liberia, Mrs. Amet had the pleasure of serving as a translator at the first Conference of the Organization of African Unity (OAU) ever held in Liberia. She was later assigned to the Ministry of Education of Liberia as an English teacher in Bensonville (now Bentol), Liberia. During the prolonged Liberian civil war, Gwen relocated to the United States and joined the Banking Industry. She was employed with: The World Bank in Washington, DC. ; Springfield Institution for Savings Bank (now Hampden Bank) in Massachusetts; Chevy Chase Bank (now Capital One Bank) in Maryland; Wachovia Bank (now Wells Fargo Bank) in North Carolina, Bank of America – North Carolina and Zenta/Accenture Credit Services in North Carolina as Loan Officer, Mortgage Underwriter, Collector of delinquent accounts and Loan Modification Specialist.

WHERE IS GWEN NOW?

Mrs. Gwendolyn Aniteye – Amet is happily retired. She enjoys traveling, relaxing, cooking, walking and listening to her favorite music-oldies. She is believed to be the historian of the Aniteye/Diggs families, safe-guarding hundreds of family photographs, as indicated by her LCM graduation photo above from 50 years ago.