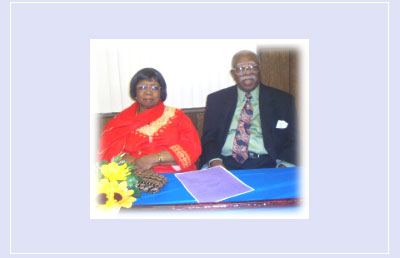 Rev. Charles S. Neal, Jr., began his educational journey on Lott Carey Mission in the 3rd grade. Rev. William H. Thomas was the principal at that time. Young Charles had to walk about 4 miles, each way, to school from Virginia to Brewerville.

After graduation he enrolled in the University of Liberia. His continuing educational journey was put on hold when he got married to Ethel Campbell and they started having children. He did several jobs in the interim to support his growing family. He worked as a police officer, taught school and worked as a cadet in the State Department, now the Ministry of Foreign affairs.

In 1956, he returned to the University of Liberia and graduated in 1959 with a Bachelor of Science Degree in Education. In 1960 he was ordained as a Minister of the Gospel in the Methodist Church, now the United Methodist Church.

The following year, he was assigned as 1st Secretary and Chargé D’affaires to the Liberian Embassy near Yaoundé, Cameroon. After returning to Liberia, he joined the now defunct Ministry of Planning and Economics Affairs and worked there until he had to leave Liberia in 1991 because of the Civil War.

Rev. Neal II is currently retired and resides in Oklahoma City surrounded and pampered by his devoted wife of 67 unbroken years, his children, grand children and great grand children.

His retirement dream was to return to the place of his birth, Neal Bush in Virginia, Liberia, to farm and raise livestock. Unfortunately, the usual infirmities which accompany old age have diminished his mobility and made this an unattainable dream for him.

He strongly believes that we should always put God first in our lives and what one has is for the family. . . .