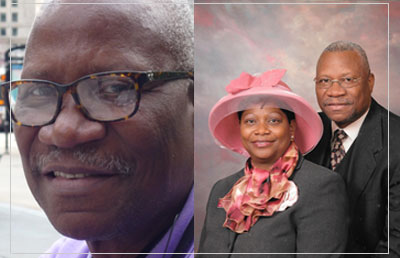 A former professor of Economics at the Cuttington University and the University of Liberia, West Africa, Ambulai “AB” Johnson, Jr. is a proud graduate of the Lott Carey Baptist Mission School. As its Superintendent, he led the 400 member Sunday school of boarding students for a year.

Upon graduation from Lott Carey, AB entered the State University of New York (SUNY) where he earned his BA and MA in Economics. He also earned an MBA from the Wharton School of Finance, University of Pennsylvania. A few years later, AB entered Pfeiffer University and obtained additional masters degrees: Masters in Health Administration and an MBA in Business Administration from Pfeiffer University. He says, “My advanced degrees in Finance and Economics have been instrumental in tailoring my life to support international relations and national development initiatives in Liberia.” With a hectic schedule, AB found time to provide volunteer services at his Alma Mater, Lott Carey Mission, for a year, teaching mathematics. He believes, “This spirit of giving back should form the institutional mantra of many, if not all of our (Liberian) institutions.”

AB Johnson has held several key positions with the Government of the Republic of Liberia: Minister of Internal Affairs, Deputy Minister of Labor, among other important roles.

WHERE IS “AB” JOHNSON NOW?

While he has retired from public service, he remains active, serving as Chairman of the Board of Directors of Lone Star Oil and Gas (an oil and gas exploration conglomerate) and as Chairman of the Board of Directors for “T” Enterprise, Inc. (a business development and consultancy company), established by his loving and supportive wife, Thelma Sedia Johnson. AB has a strong passion for agriculture, a trait from his father, A.B. Johnson, Sr. and by observing his uncle, Oscar Bullock Johnson, Sr. AB works with Liberian farmers in Johnsonville, Liberia, where he teaches the modern techniques and methodologies in farming practices.